These stories are good for the whole family and children age 5 and over. The stories are easy to understand and have an environmental message to share.

Acorn is a tiny man, stands only about 60 centimeters tall. Lord Thistledown, a rich baron, sics his hunting hounds on him for sport and when he is captured, a battle of the wits occurs. And lucky for Acorn, he may be short in stature but not in the brain department. Gold has always been a draw to people and getting as much of it as they can; some by any means possible and Acorn takes advantage of this greed because he knows, being rich doesn't necessarily make one smarter.

Acorn is as wily as a leprechaun and some people may think he is because of his size and ingenuity. But whatever a person believes, he's certainly a lovable little guy. Acorn's adventure is most definitely a thumbs up that readers of all ages should enjoy - Trip

Everyone loves a party and when Princess Penelope gets the go ahead from her mother, the queen of Flatuasia, to be in charge of baking her own cake it will be a most memorable birthday and will go down in history as the best birthday party ever!

Flatuasia is noted for growing beans the world over but because it is the main choice of food for the people living in this tiny kingdom, the air quality is somewhat smelly and not very appealing to visitors. The queen has issued a law forbidding the eating of beans, which causes unhappiness across the land. Noting their sadness, the princess decides that her cake, the largest cake the world has ever seen, will be entirely made from beans. As you can imagine, the ending will be very explosive!

Young or old should enjoy this short story.. However, before reading it, to get the feel, the sound and the true scent of it, other words get the entire benefit, I'd suggest eating a huge plate of beans and afterwards, a large piece of cake made from beans and smothered in jelly beans - mmm - so yummy! Trip
​​Junkyard Jake is a little old man who has become very concerned about climate change and especially in regards to the rapidly melting ice in the arctic. So with that thought in mind, he comes up with a wonderful idea on how to replace the disappearing ice. Although he lives very modestly in his junkyard, and has never gone to school, there is nothing very simple about Jake. Surrounded by acres of the most wondrous junk imaginable, he then puts his skills and mind into gear and begins creating a combination of inventions until he has what is needed to fix the big problem in the north. It's a tale that both children and adults should enjoy. Although it is a fantasy, it may help people to become a little more aware of the problems that are becoming more and more serious. Like Jake - it's time for everyone to do their part in bringing about a healthier Earth. Trip

This children's story has a different slant than many of the other unicorn tales. It begins with an old native sitting on a log with his grandson beside a campfire. He tells the boy the story of how the unicorn came into existence.

It's a tale depicting love, courage and sacrifice. The bear may be considered as evil, but like the unicorn and all the other living animals here on Earth, it has it's place and it's own needs, which should be respected. Also, just because something looks very different from the norm, does not mean its traits and qualities are lacking, which the horse that grows a horn proves. Trip 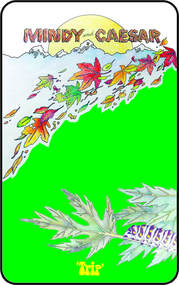 ​Mindy and Caesar is a sensitive and tender story about two trees, a beautiful maple and a wise old cedar. Their relationship over the years is humorous, sad and loving, much like many human relationships. Although their lives are touched by the harshness an brutality of Nature, it is nothing in comparison to the ceaseless carelessness and foolishness of man, who is forever attempting to bend Nature to his will. So much of the world's forests have been destroyed by greed, as if every tree that is grown has a dollar sign carved into its trunk. Although the two trees endure many hardships, the end of the story leaves one with a sense of hope for positive change in the future. However, that being said, one still has to wonder whether or not if it is too late to protect the remaining forests. Or perhaps, they'll become like Joni Mitchell sings, "They took all the trees, and put 'em in a tree museum and they charged the people a dollar and a half to see them."
Hard Cover Edition of the children's stories now available in one book. $25 each - plus shipping